Learn how to create a travel itinerary

Already signed up? Once you requested, you will see this idea board added to your account in the next 12 hours.

Orlando, the theme park capital of the world, is a destination that’s loved by all who visit. Packed with so much to enjoy, see and do, it's easy to see why. And, if you’re thinking of visiting for the first time, we encourage you to do so as it's a holiday destination, that’s unlike anywhere else and to follow this itinerary!

Ripley’s Believe It or Not!

This is the perfect nostalgic place to visit for all 90’s kids as well as adults, who were interested in television shows. The Ripley’s believe it or not is based on the popular show that had the same name. This building is an interesting museum that is filled with artifacts that are both unique as well as bizarre!

Step back in time to April 1912 when you visit Titanic: The Artifact Exhibition in Orlando! See more than 300 artifacts, costumed actors, and full-scale room recreations!

An entertainment complex featuring fun and games for the whole family. You can spend your day exploring over 40 amazing restaurants, funky bars, boutique shops and amusement park rides. Whatever your interests or favorite ways to have fun, ICON Park is the place for you.

Get the thrills of skydiving without jumping out of a plane at iFly. This indoor skydiving arena next door to Pointe Orlando will leave you breathless. More than just a quick jump, the vertical tunnel creates a cushion of air, on which you can safely float under the guidance of an instructor. This is an all-ages activity for people of all abilities. As a famous space ranger once said, “It’s not flying; it’s falling with style.”

Artists paint as you eat at this funky tapas spot with live entertainment plus a patio & bar.

WonderWorks is an amusement park for the mind with 35,000 square feet of “edu-tainment”. The attraction combines education and entertainment with more than 100 hands on exhibits that challenge the mind and spark the imagination.
This once top-secret laboratory was located in the Bermuda triangle. An experiment gone awry lifted the laboratory, carrying it to International Drive in Orlando, Florida where it landed upside down. Luckily, all of the exhibits remained intact and available for guests to explore. 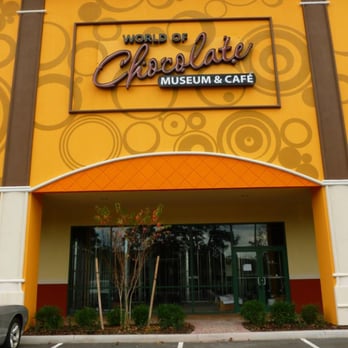 Where does chocolate come from?
Discover this and more at the world of chocolate museum tour. Where you will learn everything about chocolate history and try chocolates from around the world.

A 5-star fine dining restaurant in Orlando along with a reputation that has actually allured celebrities, dignitaries, and professionals for over thirty years.

Immerse yourself in the next generation of blockbuster entertainment at Universal Studios Florida, where cutting-edge rides, shows and attractions bring your favorite movies, television and more to life at Universal Orlando Resort.

Explore the Everglades on this thrilling high speed ride! Leave that TV remote at home, this real world adventure will take you up to 40 mph and bring you face to face with some of this world's most incredible wild creatures.

Hunger Street Tacos is just a few minutes away from Orlando's urban core. The simple joint crafts dishes such as esquites (Mexican street corn) and refreshing cucumber salads from old family recipes alongside more modern fare like fried avocado tacos and savory mushroom quesadillas. You'll know you've found the right spot when you see the building with the impressive mural of a little girl surrounded by flowers.

CityArts is downtown’s largest collective of art galleries which showcases an infusion of local and international works of art, rotated on a monthly basis.

Share on FacebookShare on TwitterShare on InstagramShare on PinterestShare on LinkedIn